Hinata Mitsutsuka (光司 陽太 Mitsutsuka Hinata) is a 2nd year in class C who is the the Singing Club secretary that people naturally gather around him thanks to his cheerful personality and the older brother of Haruna Mitsutsuka.

Hinata has spiked orange hair that has bangs hanging on the right side of his face, reddish-orange eyes and black eyebrows.

Hinata wears a dark blue uniform with a tan colored hoodie, along with green pants and orange laced shoes.

Hinata is a lively and forward guy in approaching others to cheerfully greet them. He has an overall very friendly disposition, and is proactive in his encouragement with having Saku Otonomiya join the singing club.

Hinata compliments his mother on the omelet she made him for breakfast. With Haruna Mitsutsuka (Hinata's younger sister) leaving for school, his father reminds him to look after the new student named Saku Otonomiya who Hinata heads off to meet.

Walking to school with him he explains some of the clubs available to Saku. During a break, he thinks of a song he'd like to perform.

He is at the singing club during break where he shares with Satsuma and club president Ryo Saotome how he has someone in mind for a singer.

Showing an image on his phone, Hinata then states he will ask him after school.

When Sosuke Kagura enters the room, Hinata happily greets him, revealing himself as the S.U.N he mentioned and shaking his hand. Hinata would love to perform one of Sosuke's songs, specifically 'Cloudy Day'.

Hinata attempts to contact Saku Otonomiya to no avail since he is not at home and has his phone switched off.

Saku is Hinata's childhood friend. Hinata tries to encourage Saku to try new things, such as joining the Singing Club. However, he doesn't push it onto him and intends on making sure Saku's comfortable. Hinata worries immensely about him, going as far on Saku's porch through the day while, unbeknownst to him, Saku was on a trip with the Archeology Club.

Satsuma is Hinata's fellow member of the singing club, Hinata tells him of his intent to invite Saku Otonomiya to the club.

Ryo is the vice president of the Singing Club, which Hinata is a part of him. He seems to respect him, going along with his cat idea in Abandone cheerfully.

Kakeru is a friend of Hinata, who only befriended him due to the fact both of them have little sisters. Due to this, he is a victim of Kakeru's constant yapping about his sister. This doesn't seem to affect their relationship very much though, as Hinata is still willing to listen and hang around him albiet being slightly exasperated about Kakeru's eccentricities.

Hinata makes contact with Sosuke since members of the singing club would like to prepare one of his songs.

Hinata and Mike share a special love for Mendako March figures and often tell each other about what they got. 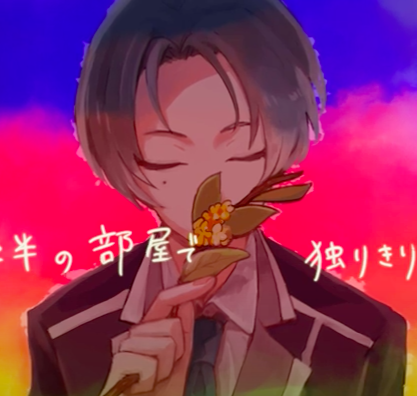