Mike has short, spiked red hair with a long section that is dyed light brown and parted to one side of his face, along with having golden eyes. Mike wears a black headband on top of his head with a dark blue uniform that is buttoned in the middle and a green tie with a white undershirt. He also wears green pants having a checkered pattern with brown and white boots.

Most people think he is a 'refreshing' guy, reliable and calm, since that is how he usually acts in front of people. However, once things do not go his way, he is prone to slipping into his true nature, a bossy, arrogant, and dominant personality. He only acts as his true self in front of Kai and Chiguma.

Mike is speaking to teacher Tsukasa having agreed to deliver some books for him. He appears quite aghast to see Kai running towards him after his voice was heard and is suddenly embraced by him.

He orders Kai to get off him before being asked if he has seen the new transfer student.

Sat opposite Kai at a curry restaurant, Mike beams with joy stating that it is the best curry he has ever tasted. He watches with some apprehension as Kai challenges Saku to a curry contest after hearing Mike describe it as the best one he ever tasted.

He awaits in the mini bus with the other archaeology club members as they wait for Saku to arrive.

At the beach he is the first to join Uta who has ran into the sea and enjoys the water based activities such as snorkelling.

Certain that Kai will win the curry making contest and get all big headed he calls Kai a mongrel, activating a puppy like expression from Uta. He is not hungry, only desiring to try Saku's curry.

After he is done eating curry with Kai, they consider investigating the stone circle that has appeared. He is pulled along by Kai and clings to him afraid of the white spirit that appears when Sosuke and Uta begin singing.

Though Kai is very fond of him, Mike does not outwardly show the same deep sentiment towards him. He shoves him away when Kai hugs him in front of others and demands he address him with the senpai honorific, even though he is a junior himself. Never the less, Mike has been friends with Kai since Kindergarten. He cried with joy at Kai's homemade curry he made. Confiding to Saku, he tells him that Kai goes nuts when it comes to curry.

Mike and Hinata share a special love for Mendako March figures and often tell each other about what they got.

Speaking with him at the curry restaurant where he works, Mike knows him as Kai's classmate.

They are on the same team in a volleyball game against Uta and Sosuke.

The class C - English teacher who Mike agrees to run an errand for.

A teacher at his school. 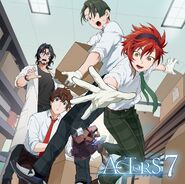 Having a curry bond

Afraid of the shadows
Community content is available under CC-BY-SA unless otherwise noted.
Advertisement