Steven Kelly
Ryo Saotome (五月女 燎 Saotome Ryo) is a 3rd year, Class B, and Singing Club Vice President. He is always being put out by Satsumi.

Ryo has shoulder-length yellow hair that is half tied in the back with bangs hanging on either side and dark brown eyes.

Ryo wears a necklace shaped tag around his neck and a dark blue uniform with a white undershirt that is worn unbuttoned at the top. Also dark green pants and tan shoes with white laces.

Ryo's glowering facial expression gives way to his personality. In keeping with a school delinquent including a rough manner of speech, being hot blooded and having an unkempt appearance. He skips class without a care, receives terrible grades, the list goes on. Despite all this, he is a huge animal lover, freaking out about how cute cats are and is quite friendly if not angered. Ryo also has no problem asking for forgiveness, especially when Mitsuki Akika is not happy and will gladly declare his stubborn kohai as his 'little brother'. He also shows soft tender moments.

Ryo is fanning himself with a magazine before having the wording of his language analysed by Satsuma. Contemplating it for a moment, he then states that it is not the issue here before asking if it is any way to speak to him. He is touched by the emotional feeling of the song Hinata Mitsutsuka shares with him.

With Saku Otonomiya joining the singing club discussed more, Ryo thinks it should be easy then as Hinata sets about having him involved.

In the clubroom, Ryo advises Hinata Mitsutsuka to be more assertive in attempting to get Saku Otonomiya to join the music club. He meets Saku in person after accidentally bumping into him on the stairway.

Having discovered Saku Otonomiya's fondness for cats, Ryo has deemed it a good idea to acquire cat related items and dress himself in a giant cat suit.

Satsuma is a fellow member of the Singing Club. They are complete opposites of eachother and clash with eachother. As implied by Mitsuki, they frequently get into small fights that end with them being able to 'reaffirm their friendship.' Out of all the characters, Ryo spends the most time with Satsuma.

In Agitato, their relationship is expanded on. Despite of all of their differences, they do truly care about eachother and eachother's safety. They both reflect on eachother's prespectives about the cat ordeal and both admit they were wrong in lashing out. After sorting things out with Konishi, they return to their usual relationship with teasing and small fights with a new understanding for eachother.

A member of the singing club who is keen to bring in a new member.

Also in the singing club, they exchange some casual bickering but get along fine.

Ryo hears about Saku first from Hinata Mitsutsuka before learning his name and supports the decision to have him involved with the club.

A teacher at his school.

Although Ryo saw Konishi as a friend of his, Konishi has held a strong grudge against Ryo ever since he asked for Ryo's advice on a jacket in a local store. Ryo was taken by Konishi's anger, but was later stopped by Satsuma explaining to Konishi that Ryo has a sense of bad fashion. Ryo and Konishi make up after the incident of cat's being abused. 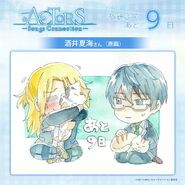 Reassuring that the cat ears are fine