Howard Wang
Uta Outa (往田 詩 Outa Uta) is a 1st year in class C student who is not part of any club. He is a poet that is not understood by ordinary people. He writes lyrics that only some of his bandmates can understand.

Uta has short pink hair that appear either black or white at the tips. The back of his hair is darker in color matching his eyebrows and he has magenta eyes.

Uta wears a red tie, white undershirt, along with brown pants, and pink and white shoes with yellow laces. The most distinguishing clothing is a pink and white coat reaching down to his knees with long sleeves that he wears loose over his hands.

Uta acts in the moment, making an entrance from a roof above where Saku Otonomiya is sat to explaining how hungry he is when a curry eating contest is being discussed. This extends to removing his outer clothes and running into the sea exclaiming how much he loves the beach, in the middle of an explanation on why they are there.

At Sosuke Kagura's call, Uta makes his entrance before Saku Otonomiya by way of dropping down from a roof above them. It was Uta who wrote the lyrics to a song Saku liked and he introduces himself to Saku.

Along with Sosuke they are at the curry house where Saku works where his song writing skills are offered on behalf of Sosuke to help Saku. Uta announces that he is starved, and that he shrinks when he is hungry, enough for the wind to blow him away.

He happily sings the word volcano as they wait for their order. He is in for Saku and Kai's curry making contest, declaring that he loves curry and cannot wait. His eyes glimmer mischievously when he spots the curry packets being given away.

Waiting on the bus with other archeology students, he is positive that Saku will arrive when he is running late. His certainty is based on the fact that he can see Saku approaching the bus as they speak. He makes his presence known when Saku arrives by saying that he is here too.

Arriving at the beach before the white wall, Uta is not particularly interested in Washiho's explanation of why they are here in so much as he is interested in the sea. Throwing some outer clothes into the air he runs excitedly into the waves with clothes still on.

Taking part in various water based activities, Uta then notices that Saku's curry he was making has spilled. Consequently he provides the packaged ones he acquired from the curry house.

In his enthusiasm for the curry he adopts puppy features before stating that he wants bow-wow curry.

Appearing asleep at his desk, he later appears behind Hinata announcing that he is always in the mood for curry as they collectively discuss where Saku went. He joins Hinata, Satsuma and Sosuke at the cafe that Saku also works at and greets him with his 'floppy hand wave'. In it for the honey toast, Uta enjoys one himself.

Having arrived at school on time, he finds Sosuke and confirms he had writers block concerning music. Along with Saku they search for white shadows. Making his way to hospital he identifies Nozomi by asking who puts miso in their curry.

After contentedly listening to Sosuke's singing, Uta sees a white shadow appear nearby.

Sosuke and Uta are very close friends and have known eachother since they were small kids. Uta keeps in close contact with Sosuke, both in person and on phone, and work together in helping Saku Otonomiya with singing. Sosuke enthusiastically supports Uta's songwriting claiming when his switch is on his lyrics just flow. Sosuke is occasionally irked by Uta's keenness, such as singing 'volcano' repeatedly but soon after orders curry for him at once hearing how hungry he is. He tries to retrieve Uta's clothes he abruptly threw in the air to land onto the sand when Uta ran into the sea.

Uta is one of the members of their music unit, Sakutasuke. He regularly goes to the hospital to visit Saku's sister, Nozomi.

Saku thanks him for helping him come as far as he has through the school year, along with everyone else.

A member of the music club

A teacher, who Uta does not listen to in favour of running into the sea.

Uta came up with some lyrics whilst watching Satsuma eat at the cafe they went to together. 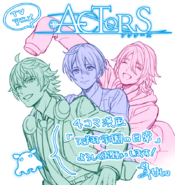 Meeting Saku for the first time

Getting blown away by the wind when hungry

In the ocean from Episode 2